A bronze bull gear was sent for failure investigation (Figure 1). It was used to rotate bleach washer number 65B at a rate between 4 and 5 RPM. The contacting gear was a hardened steel worm gear, which was powered by a 50 horsepower 1800 RPM electric motor.

The gear is a cast copper alloy with cut teeth and machined surface and was only in service for one month.

Examination of the gear tooth revealed that there was a large amount of material loss. A measurement taken near the base of the tooth where the material loss was most obvious revealed that tooth had gone from a thickness of 31 mm to 20 mm, a loss of I I mm. The contact surface had grooves running along the path the worm gear would have taken.

Debris was also found along what was probably the exiting edge of the gear teeth (Figure 2). Along the front of the teeth, plastic deformation was seen near the edges where decreasing thickness could no longer support the load. Some cracking was observed in these areas. When opened, they revealed that the mode of crack propagation was interdendritic. 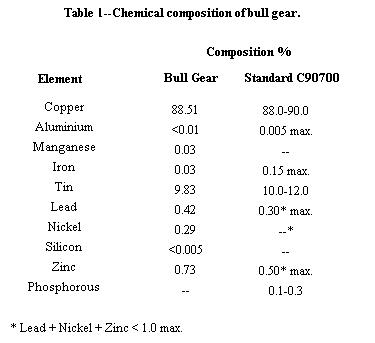 Chemical analysis of the bronze gear revealed that it conformed most closely with the UNS standard for copper alloy C90700 (Table 1). The lead and zinc content however were slightly above those allowed by the standard. Several samples where taken from the gear and examined microscopically. They revealed large amounts of interdentritic shrinkage porosity (Figure 3) and interdentritic segregation (Figure 4).

The porosity reduces the amount of area supporting the load and therefore raises stresses in the material. The heterogeneity of the structure is caused by rejection of tin into solution as the dendrites grow while cooling.

This segregation also reduces the mechanical properties of the material. Etching the microstructure with 20 nil NH40H, 20 ml H20, 20 nil H202 (3%) revealed a coarse dendrite microstructure (Figure 5). No plastic deformation of the working surface was observed which indicates abrasive wear.

Hardnesses were taken on the cross section of a tooth which gave an average Vickers hardness number of 76.6 VHN (5Kg) (Table 2). This is below the Brinell-500 Kg hardness number of 95 (100VHN) required by the ASTM standard, B427-93a “Standard Specification for Gear Bronze Alloy Castings”. 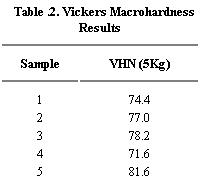 A lower hardness number also suggests that the mechanical properties of the material would be below standards. This agrees with our metallographic examination.

The bronze bull gear failed as a result of sever abrasive wear. The gear did not meet ASTM materials specifications for this application and this probably had a great influence on the final failure. However, there are several possible causes of abrasive wear for which the system should be examined :

In this case, a large amount of porosity, a coarse dendrite structure, and interdentritic segregation combined to reduce the properties of the bronze bull gear below those required by ASTM B427-93a standards. A possibility is that that when the gear is subjected to loads or overloading, these low properties would allowed the gear teeth to deflect. The gear surfaces would no longer meet as they were designed, decreasing the contact surface, which would have increased the loads and therefore wear. Contamination of the lubricant would have followed, causing the wear to continue.

In future this bronze bull gear should be ordered specifying that it conform to ASTM standard B427-93a for the copper alloy UNS C 90700. As well the lubricant should be checked regularly for contamination and both gear surfaces should be examined for damage.