Influence of Temperature on Crystal Structure 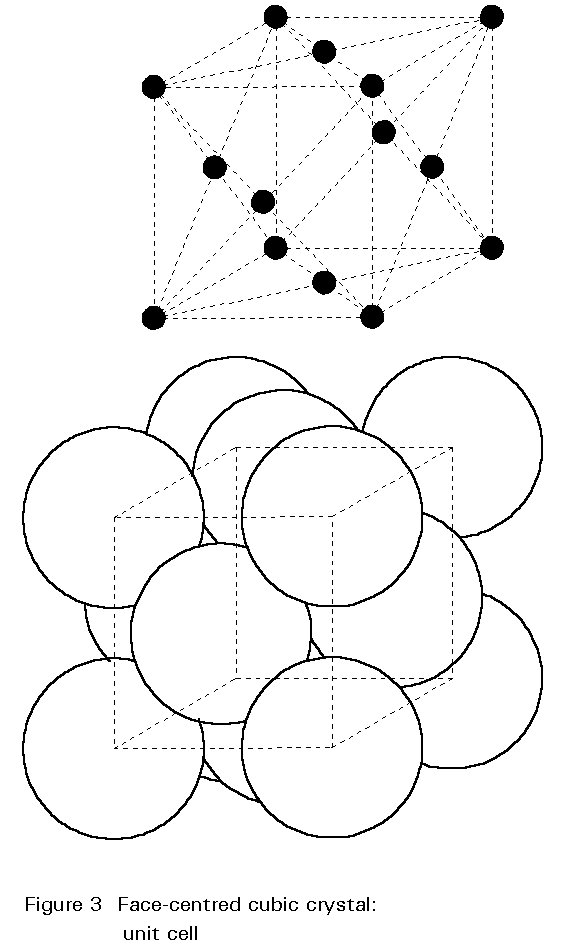 A given number of atoms occupy slightly less volume when arranged as fcc crystals than when arranged as bcc crystals. Thus the change of the crystal structure is accompanied by a volume change. This change is illustrated in Figure 4. When a piece of pure iron is heated, expansion occurs in the normal way until the temperature of 910° C is reached. At this temperature there is a step contraction of about ½% in volume associated with the transformation from the bcc to fcc crystal structure. Further heating gives further thermal expansion until, at about 1400°C the fcc structure reverts to the bcc form and there is a step expansion which restores the volume lost at 910°C. Heating beyond 1400°C gives thermal expansion until melting occurs at 1540°C. The curve is reversible on cooling slowly. 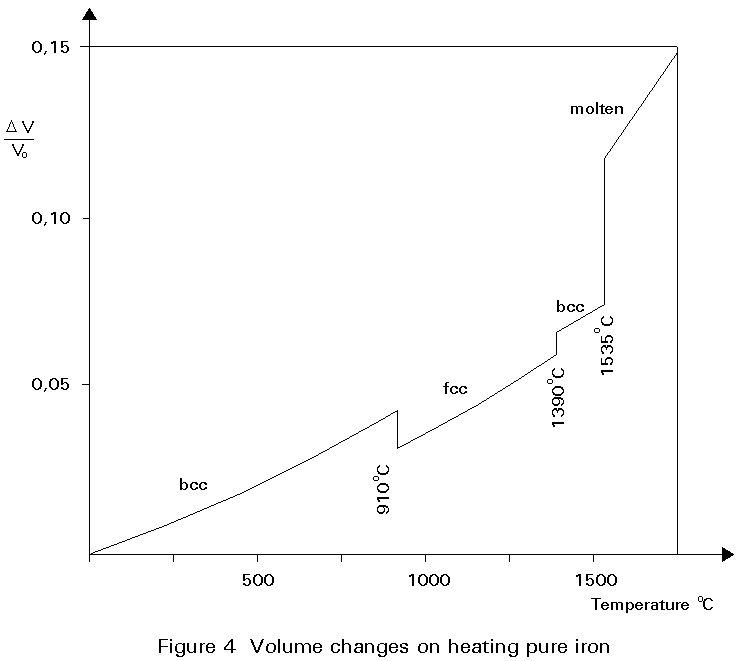 The property that metals may have different crystal structures, depending on temperature, is called allotropy.

Solution of Carbon in bcc and fcc Crystals

When the atoms of two materials A and B have about the same size, crystal structures may be formed where a number of the A atoms are replaced by B atoms. Such a solution is called substitutional because one atom substitutes for the other. An example is nickel in steel.

When the atoms of two materials have a different size, the smaller atom may be able to fit between the bigger atoms. Such a solution is called interstitial. The most familiar example is the solution of carbon in iron. In this way the high temperature fcc crystals can contain up to 2% solid solution carbon at 1130°C, while in the low temperature bcc crystals, the maximum amount of carbon which can be held in solution is 0,02% at 723°C and about 0,002% at ambient temperature.

Thus a steel containing 0,5% carbon, for example, can dissolve all the carbon in the higher temperature fcc crystals but on cooling cannot maintain all the carbon in solution in the bcc crystals. The surplus of carbon reacts with iron to form iron carbide (Fe3C), usually called cementite. Cementite is hard and brittle compared to pure iron.
The amount of cementite and the distribution of cementite particles in the microstructure is important for the engineering properties of steel.

The following nomenclature is used by the metallurgist:

Steel used in structures such as bridges, buildings and ships, usually contains between 0,1% and 0,25% carbon by weight.

The iron-carbon phase diagram is essentially a map. The most important part is shown in Figure 5. More details are given in Figure 6. 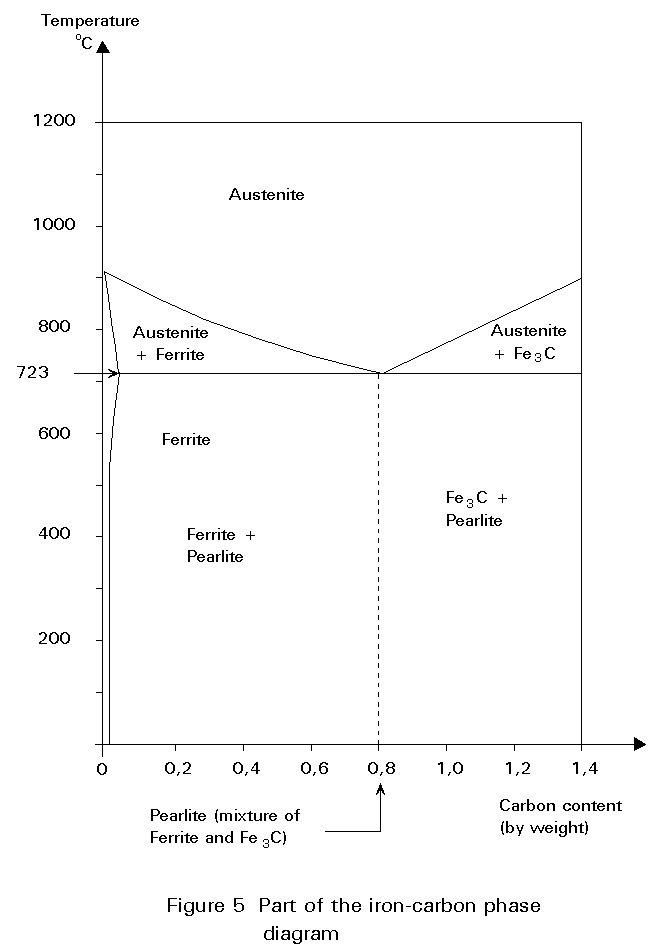 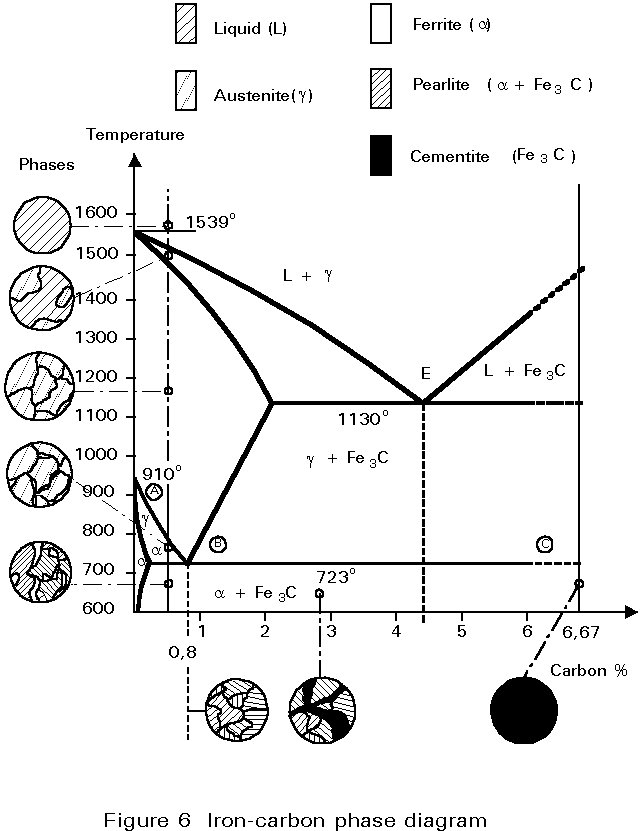 Any point in the field of the diagram represents a steel containing a particular carbon content at a particular temperature. The diagram is divided into areas showing the structures that are stable at particular compositions and temperatures. The diagram may be used to consider what happens when a steel of 0,5%C is cooled from 1000°C (Figure 6). At 1000°C the structure is austenite, i.e. polycrystalline fcc crystals with all the carbon dissolved in them. No change occurs on cooling until the temperature reaches about 800°C. At this temperature, a boundary is crossed from the field labelled Austenite (g) to the field labelled Ferrite + Austenite (a + g), i.e. some crystals of bcc iron, containing very little carbon, begin to form from the fcc iron. Because the ferrite contains so little carbon, the carbon left must concentrate in the residual austenite. The carbon content of the austenite and the relative proportions of ferrite and austenite in the microstructure adjust themselves to maintain the original overall carbon content.

These quantities may be worked out by considering the expanded part of the iron-carbon diagram shown in Figure 7. Imagine that the steel has cooled to 750°C. The combination of overall carbon content and temperature is represented by point X. 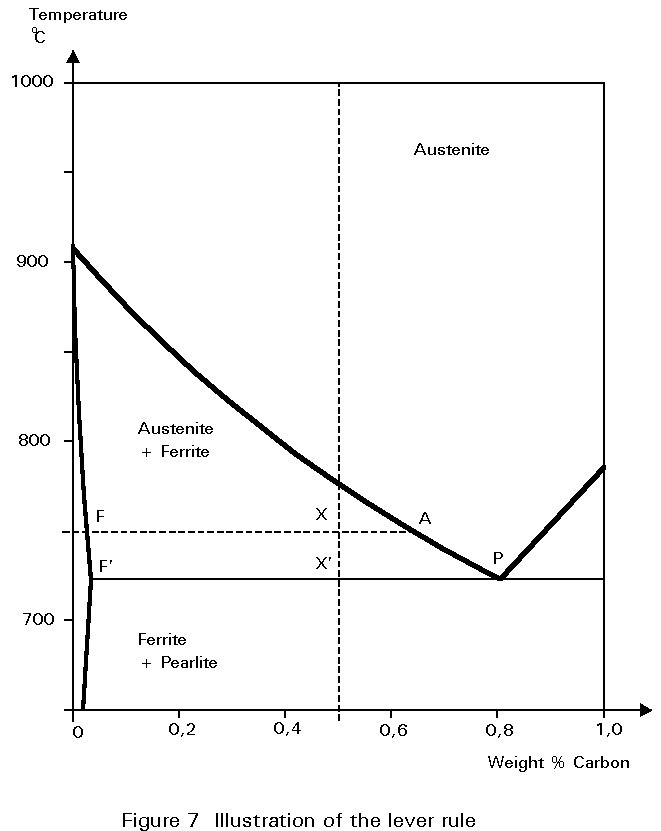 All the constituents of the microstructure are at the same temperature. A line of constant temperature may be drawn through X. It cuts the boundaries of the austenite and ferrite field at F and A. These intercepts give the carbon contents of ferrite and austenite respectively at the particular temperature. If, now, the line FA is envisaged as a rigid beam which can rotate about a fulcrum at X, the ‘weight’ of austenite hanging at A must balance the ‘weight’ of ferrite hanging at F.

This is the so-called Lever Rule:
Weight of ferrite ´ FX = Weight of austenite ´ AX

The ratio of ferrite to austenite in the microstructure is then given by:

Thus, referring to Figure 7 and using the Lever Rule:
Weight of ferrite ´ F¢ X¢ = Weight of pearlite ´ F¢ P
In this case, there should be about twice as much pearlite as ferrite.
For other steels containing less than 0,8%C, the explanation is identical except for the proportions of pearlite in the microstructure below 723°C. This varies approximately linearly with carbon content between zero at 0,02%C and 100% at 0,8%C. A typical mild steel containing 0,2%C would contain about 25% pearlite.