Cooling Rate During Austenite to Ferrite Transformation and Grain Size

During cooling of austenite, the new bcc ferrite crystals start to grow from many points. The number of starting points determines the number of ferrite grains and consequently the grain size. This grain size is important because the engineering properties are dependent on it. Small grains are favourable. 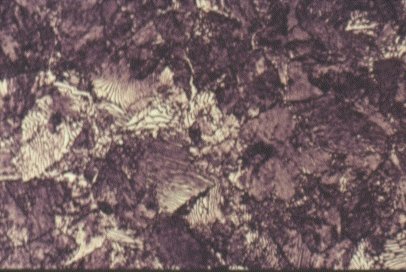 By adding elements like aluminium and niobium, the number of starting points can be increased. Another important factor is the cooling rate. When cooling is slow, the new ferrite grains develop from only a few most favourable sites. At high cooling rates, the number of starting points will be much higher and the grain size smaller. Slides 7 - 9 shows steels with various grain sizes, produced at different finish rolling temperatures.

Another important factor is that, when a fine grained steel is heated to a temperature in excess of about 1000°C, some of the austenite grains grow while neighbouring grains disappear. This grain growth occurs during welding in the so-called heat affected zone (HAZ). This is a 3-5 mm wide zone in the plate adjacent to the molten metal. Microstructural changes in the heat affected zone usually give rise to a deterioration of the engineering properties of the steel.

Influence of carbon on the microstructure

The iron-carbon phase diagram in Figures 5 and 6 shows that, for structural steel (between 0,1% and 0,25% carbon), the formation of ferrite starts at about 850°C and ends at 723°C. It will be remembered that ferrite can contain hardly any carbon. Consequently, the austenite phase transforms to ferrite and cementite (Fe3C). 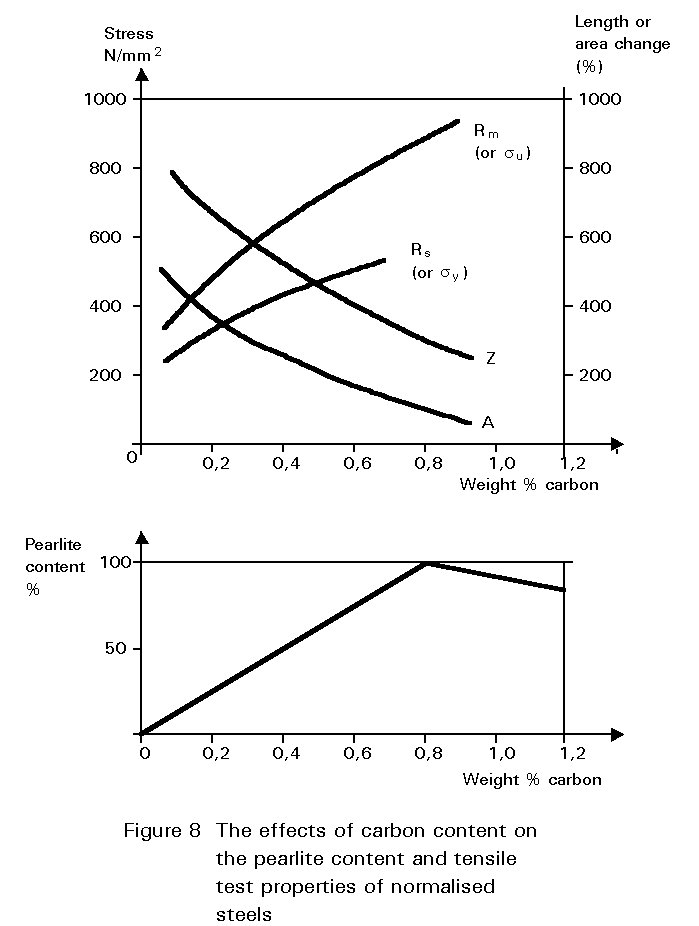 When the cooling rate is slow, the carbon atoms have time to migrate to separate “layers” in the microstructure and to form the structure called pearlite, as shown before in Slides 2, 3, 4 and 5. The ferrite in this mixture is soft and ductile. The cementite constituent is hard and brittle. The mixture (pearlite) has properties between these two extremes. The tensile strength properties of a steel containing both ferrite and pearlite roughly scale according to the proportions of these constituents in the microstructure as seen in Figure 8. The dramatic effect of carbon content on toughness is shown in Figure 9. Increasing pearlite content decreases the upper shelf toughness and increases the ductile-brittle transition temperature. 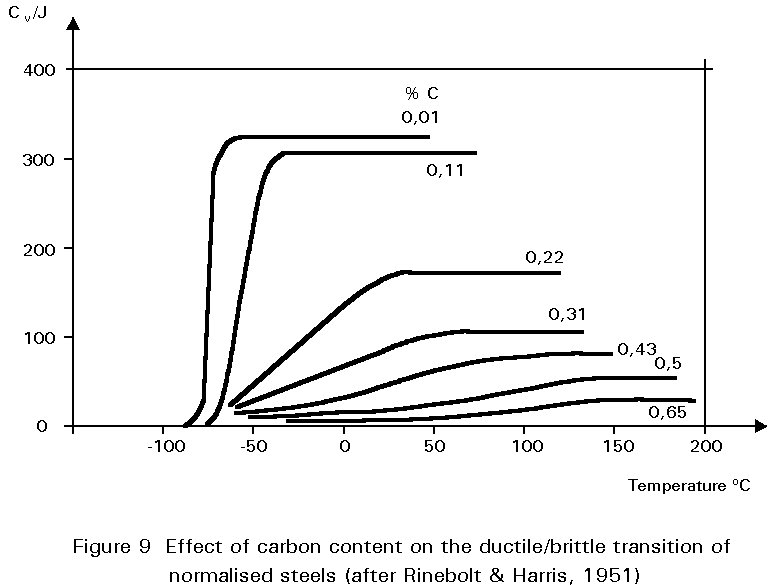 Figures 8 and 9 illustrate one of the difficulties in the choice of carbon content. Increasing the carbon content is beneficial in that it improves yield strength and ultimate tensile strength, but is undesirable in that it reduces ductility and toughness. A high carbon content may also cause problems during welding.

In European Norm 10025, Table 3, the chemical composition for flat and long products is given. An extract is presented in Figure 10. The designation S235 JR, for example, indicates that the yield strength is at least 235 N/mm2. It is emphasised that the compositional values in the table are maximum values. Many steelmakers achieve much lower levels, resulting in better ductility, resistance against brittle fracture, and weldability 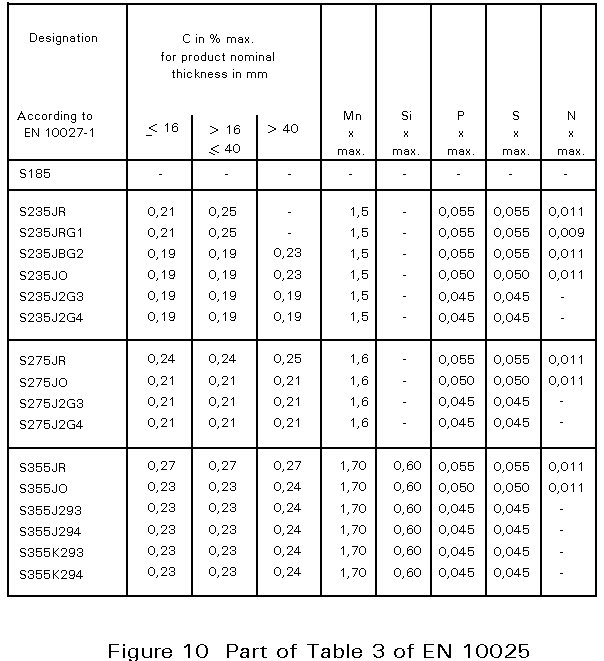 The lowest carbon content that can be achieved easily on a large scale is about 0,04%. This content is characteristic of sheet or strip steels intended to be shaped by extensive cold deformation, as in deep drawing. Carbon contents of more than 0,25% are used in the wider range of general engineering steels. These steels are usually put into service in the quenched and tempered state (see below) for a great multiplicity of purposes in mechanical engineering.

The need for control of grain size

The mechanical properties of steel are affected by grain size. Slides 8 and 9 show microstructures of two samples of the same batch of mild steel which have been treated, by methods outlined in Section 4.2.3, to give different grain sizes. Reduction in grain size improves yield strength but also has a profound effect on the ductile/brittle transition temperature, see Figure 11. Thus, there are several benefits from the same microstructural charge. This is an unusual circumstance in metallurgy where adjustments to improve one property often mean a worsening of another and a compromise is necessary. An example of such compromise relates to carbon content, already discussed above. 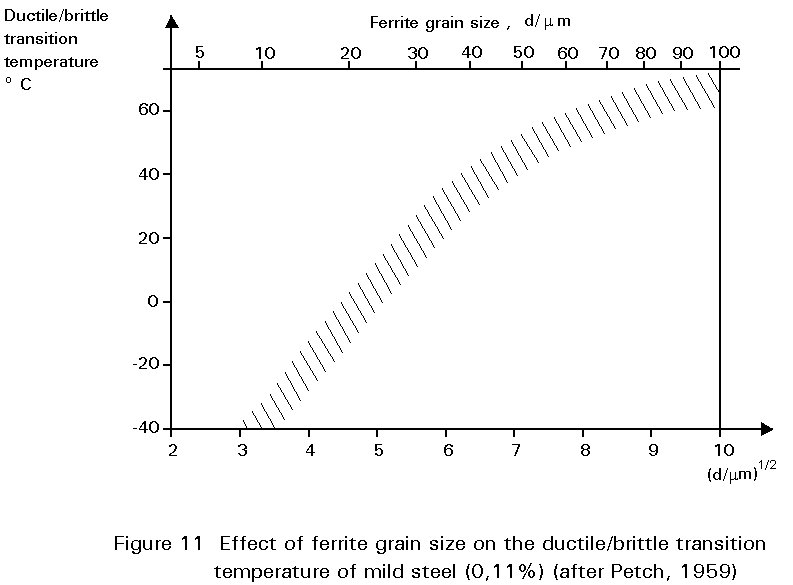 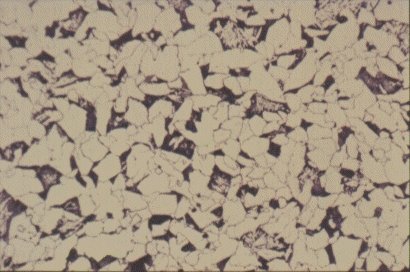 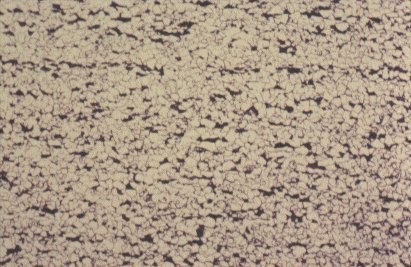 In last posting the transformations that can occur when steels are cooled slowly are described. To form ferrite and pearlite from austenite, the carbon atoms in the steel must change their positions. The diffusion processes which transport the atoms within the solid occur at rates which depend exponentially on temperature. The rate of cooling also affects these transformations.

If the cooling rate is increased the transformations occur faster. In addition, the diffusional processes cannot keep up with the falling temperature. Thus, a steel cooled very slowly in a furnace keeps close to the requirements of the phase diagram. But the same steel, removed from the furnace and allowed to cool in air, may undercool before completing its sequence of transformations. This more rapid cooling has two effects. First it tends to increase slightly the proportion of pearlite in the microstructure. Secondly it produces ferrite with a finer grain size and pearlite with finer lamellae. Both of these microstructural changes give higher yield strength and better ductility and toughness. 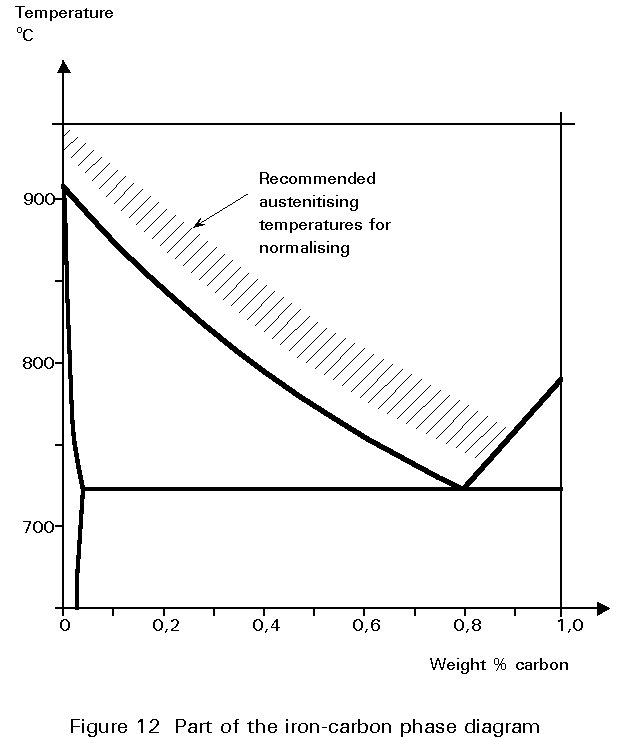 Furnace cooled steels are known as fully annealed steels. Air cooled steels are known as normalised steels. Grain size can also be affected by the temperature to which the steel is heated in the austenite range. The grains of austenite coarsen with time, the rate of coarsening increasing exponentially with temperature. The coarsening is important because the transformation to ferrite and pearlite on cooling starts at the grain boundaries in the austenite. If the new structures start growing from points which are further apart in a coarse grained austenite, the grain size of the resulting ferrite is itself coarser. Thus, steels should not be overheated when austenitising before normalising.

Structural steel sections are produced by hot rolling ingots or continuously cast strand into the required forms. The rolling processes have important effects on the development of the microstructure in the materials. The early stages of rolling are carried out at temperatures well within the austenite range, where the steel is soft and easily deformed. The deformation suffered by the material breaks up the coarse as-cast grain structure but, at these high temperatures, the atoms within the material can diffuse rapidly which allows the deformed grains to recrystallise and reform the equiaxial polycrystalline structure of the austenite. 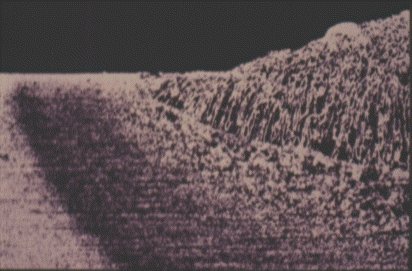 Slide 10 : Microsection through a fillet weld on structural steel showing three distinct regions: the coarse grained cast structure of the weld deposit, the heat affected zone, and the unaffected microctructure of the parent steel. (x 200)

Heavy deformation at low temperatures in the austenite range gives finer recrystallised grains. If the rolling is finished at a temperature just above the ferrite + austenite region of the equilibrium diagram and the section is allowed to cool in air, an ordinary normalised microstructure having moderately fine-grained ferrite results. Modern controlled rolling techniques aim to do this, or even to roll at still lower temperatures to give still finer grains.

If the temperature falls so that the rolling is finished in the ferrite + austenite range, the mixture of ferrite and austenite grains is elongated along the rolling direction and a layer-like structure is developed. If now, the section is air-cooled, the residual austenite decomposes into fine-grained ferrite and pearlite, with the later being present as long, cigar shaped, bands in the material, as in Slide 10. Structural steels are not harmed by microstructures of this sort.

If the finish rolling temperature drops further, to below 723°C, the equilibrium diagram shows that the structure should be a mixture of ferrite and pearlite. Rolling in this range is usually restricted to low carbon steels containing less than 0,15%C because the presence of pearlite makes rolling difficult. 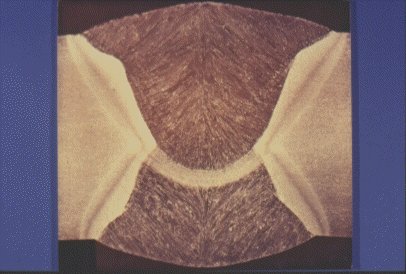 If the temperature is above about 650°C, the ferrite grains recrystallise as they are deformed, as was the case with austenite. The carbide laths (Fe3C) in the pearlite become broken and give rise to strings of small carbide particles extending in the direction of rolling, see Slide 11. The ferrite from the pearlite becomes indistinguishable from the rest of the ferrite.

If rolling is done at ambient temperature, the pearlite is broken up in the same way, but the ferrite can not recrystallise. It work-hardens, i.e. the yield and ultimate tensile strength of the steel increase, and the ductility decreases, see Figure 13. As cold rolling continues, the force required to continue deformation increases because of the increasing yield strength. Furthermore, the steel becomes less ductile and may begin to split. The amount of cold rolling that can be done is therefore very much smaller than that which can be achieved when the steel is hot. 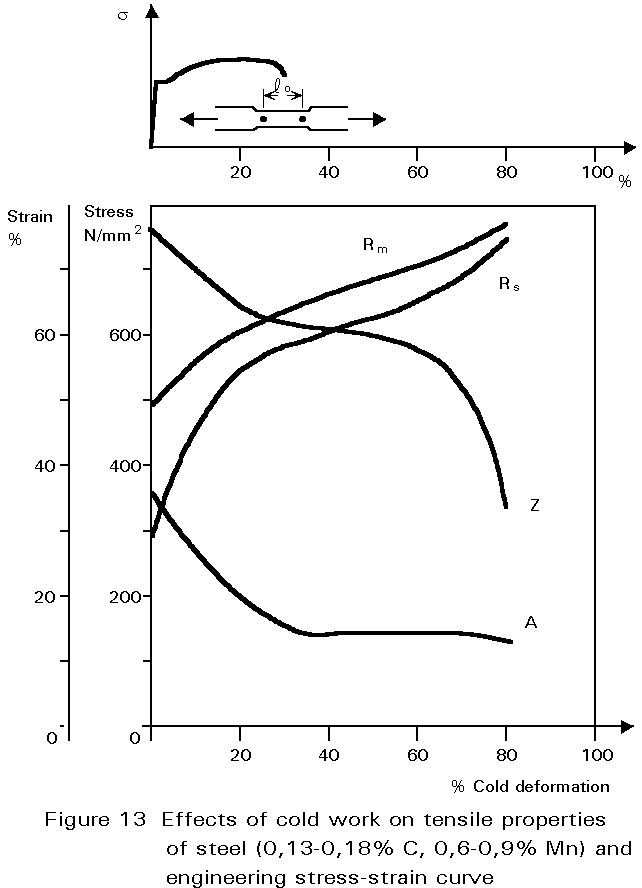 Of course, cold working need not be applied by rolling. Any way of deforming the material causes work hardening. For example, high strength steel wire is made by cold-drawing, imparting large deformations. In another example, one type of reinforcing bar is made by twisting square section bar into a helical form. The cold-deformation produced in this way is not large but causes significant work hardening.

To restore the ductility and at the same time reduce the work hardened state of the material, it is necessary to reform the isotropic, polycrystalline structure of the ferrite. Re-heating to temperatures between about 650°C and 723°C allows the ferrite to recrystallise. The carbide particles are unaffected by this treatment.

Thus, there is another technique for controlling the grain size of steel. The greater the amount of deformation before the recrystallisation treatment and the lower the temperature of the treatment, the finer is the final grain size. Because this type of treatment does not involve the formation and decomposition of austenite, it is known as sub-critical annealing. The resulting microstructure has good ductility and deep drawing characteristics. Sheet steels of low carbon content (< 0,1%C) are usually supplied in this condition. Objects such as motor car body panels are formed from such steels by cold pressing. If the material is heated into the austenite range, subsequent cooling reforms the normalised microstructure. Continue to “Rapidly Cooled Steels“…