Sulphur, Phosphorus and Other Impurities

One tonne of steel, a cube with sides of about 0,5m, contains between 1012 and 1015 inclusions which can occupy up to about 1% of the volume. The total content is largely determined by the origins of the ores, coke and other materials used to extract the metal in the first place, and by the details of steelmaking practice. 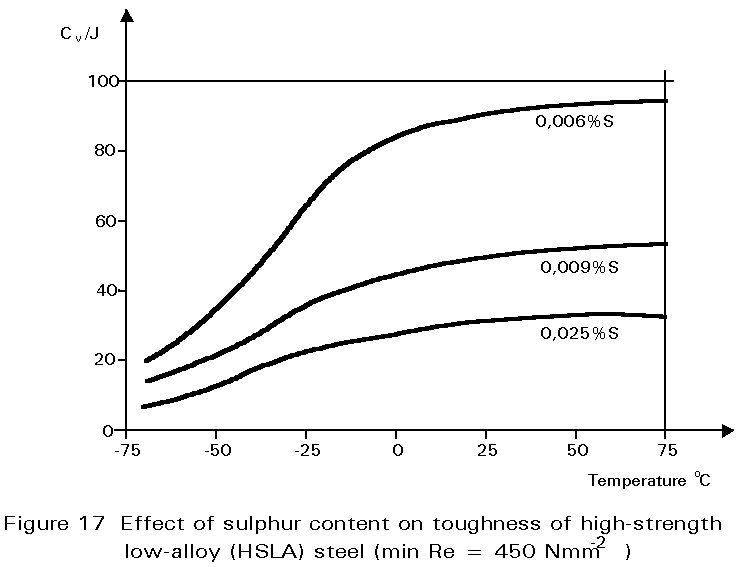 The principal impurities which worry steelmakers are phosphorus and sulphur. If not at very low concentrations, these impurities form particles of phosphide and sulphide which are harmful to the toughness of the steel. Typically, less than 0,05% of each of these elements is demanded. Low phosphorus contents are relatively easily attained during the refining of the pig iron into steel, but sulphur is more difficult to remove. It is controlled by careful choice of raw materials and, in modern steelmaking, by extra processing steps to remove it.

Manganese is always added to steels. It has several functions but the important one in this context is that it combines with the sulphur to form manganese sulphide (MnS). If the manganese were not present, iron sulphide would form which is much more harmful than MnS. 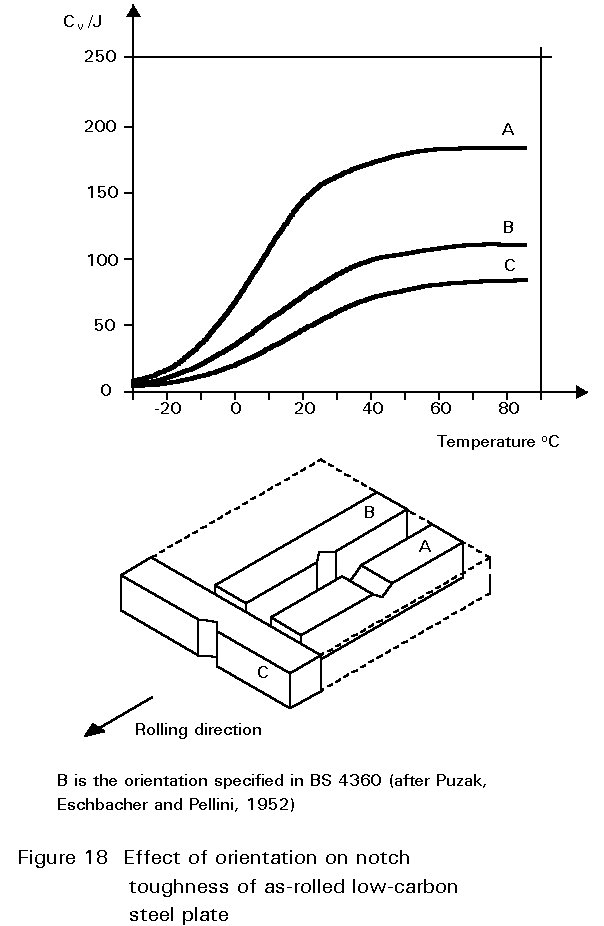 Some of the inclusions are too small to be seen with optical microscopes and must be detected by more elaborate methods. Among this group, which are mainly equiaxial in shape, are nitrides of aluminium and titanium which are deliberately introduced in order to inhibit the processes which lead to coarsening of grain size.

Other inclusions, large enough to be seen readily with the optical microscope, include entrained particles of slag, deoxidation products and manganese sulphide. At hot rolling temperatures, these inclusions are plastic and are elongated in the rolling direction. The result is shown in Figure 1. The properties of steels containing such inclusions reflect both the volume of the inclusions and the anisotropy of their shapes, see Figures 17 and 18. 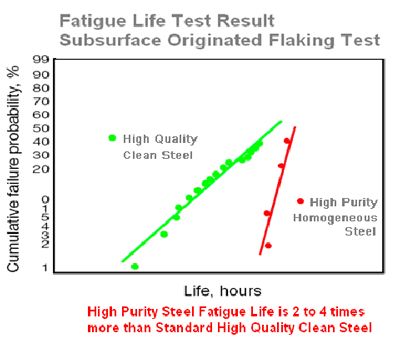 In recent years, a number of practices have been introduced which aim to reduce the inclusion content in the molten steel before it is cast into ingots. Sulphur contents of 0,01% or less are now regularly produced. These processes produce what have become known as ‘clean steels’. The expression is relative. Clean steels still contain many inclusions, but are significantly tougher than ordinary steels.

Inclusion shape control is also practised in better quality steels. Additions of calcium or cerium and other rare earth elements to the refined molten steel combine with the sulphur in preference to the manganese. Sulphides of these elements appear in the final microstructure as equiaxial particles and are not so deleterious to the through-thickness ductility of the material as elongated MnS inclusions.

Steels treated in these ways are used in applications where toughness is of paramount importance and where the extra cost can be justified. Examples include high integrity pressure vessels, oil and gas pipelines and the main legs of offshore platforms. The introduction of continuous casting has also improved the quality of conventional structural steels.

It has been noted earlier that the residual sulphur impurity in steel is less harmful when formed into particles of MnS rather than iron sulphide. The presence of small amounts of manganese in the steel confers several other benefits. In normalised steels, it tends to increase the amount of undercooling before the start of the formation of ferrite and pearlite. 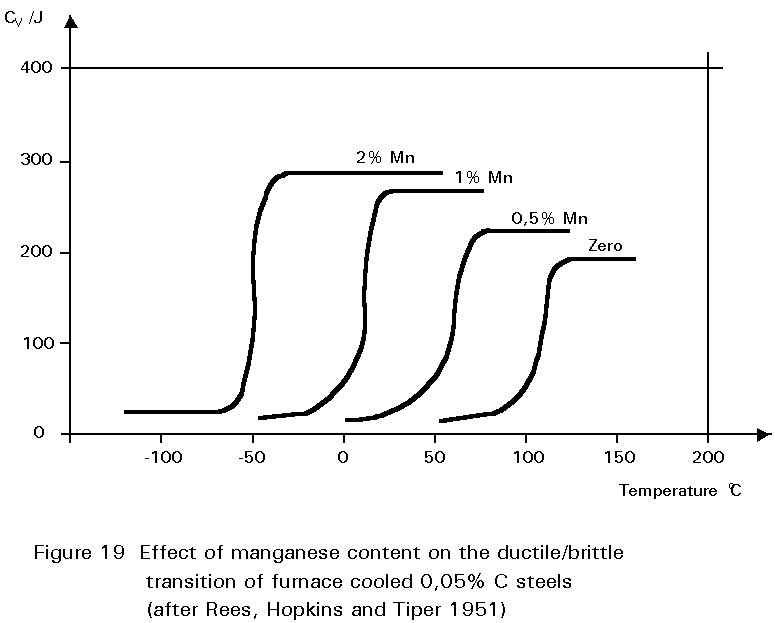 This gives finer grained ferrite and more finely divided pearlite. Both of these changes improve strength and reduce the ductile/brittle transition temperature. The dissolution of the manganese atoms in the ferrite crystals also improves the strength of the ferrite. These effects on properties are summarised in Figures 19 - 21. 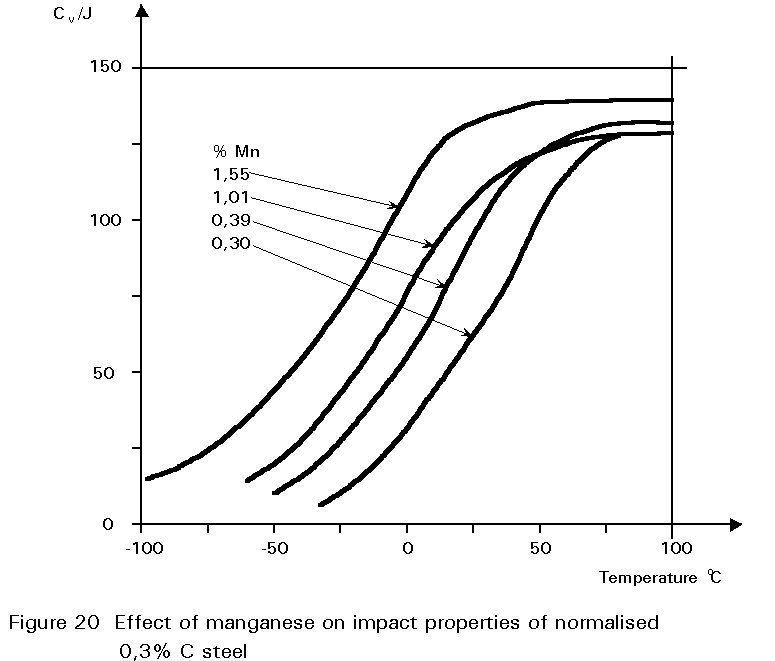 If the manganese content is increased too much, its effect ceases to be beneficial and can become harmful because it increases hardenability, i.e. promotes martensite formation. 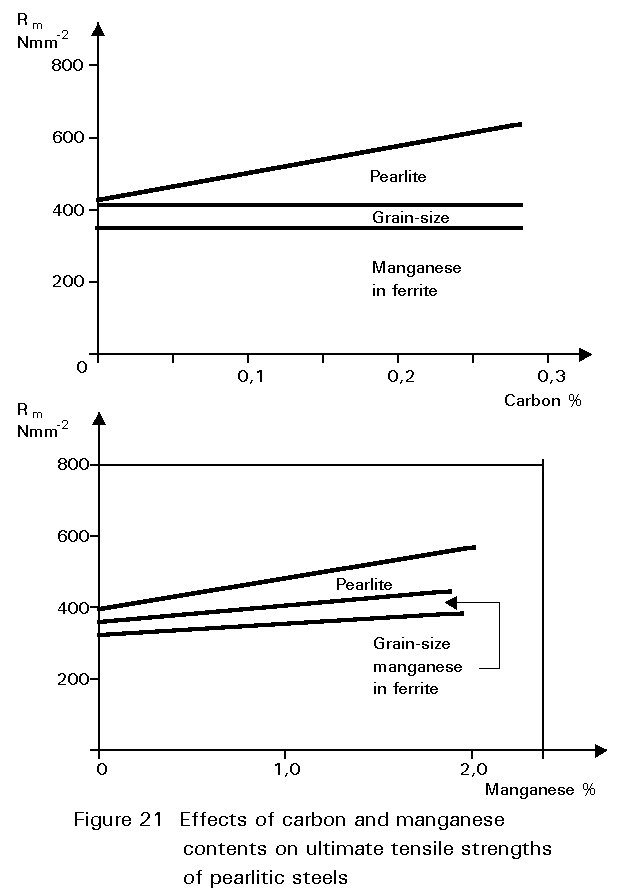 It is for this reason that a maximum manganese content is specified: For S355 in Table 3 of EN 10025 this maximum is 1,7% by weight, see Figure 16. A convention has also grown that distinguishes between plain carbon steels, i.e. steels containing < 1%Mn, and carbon manganese steels i.e. >1%Mn.