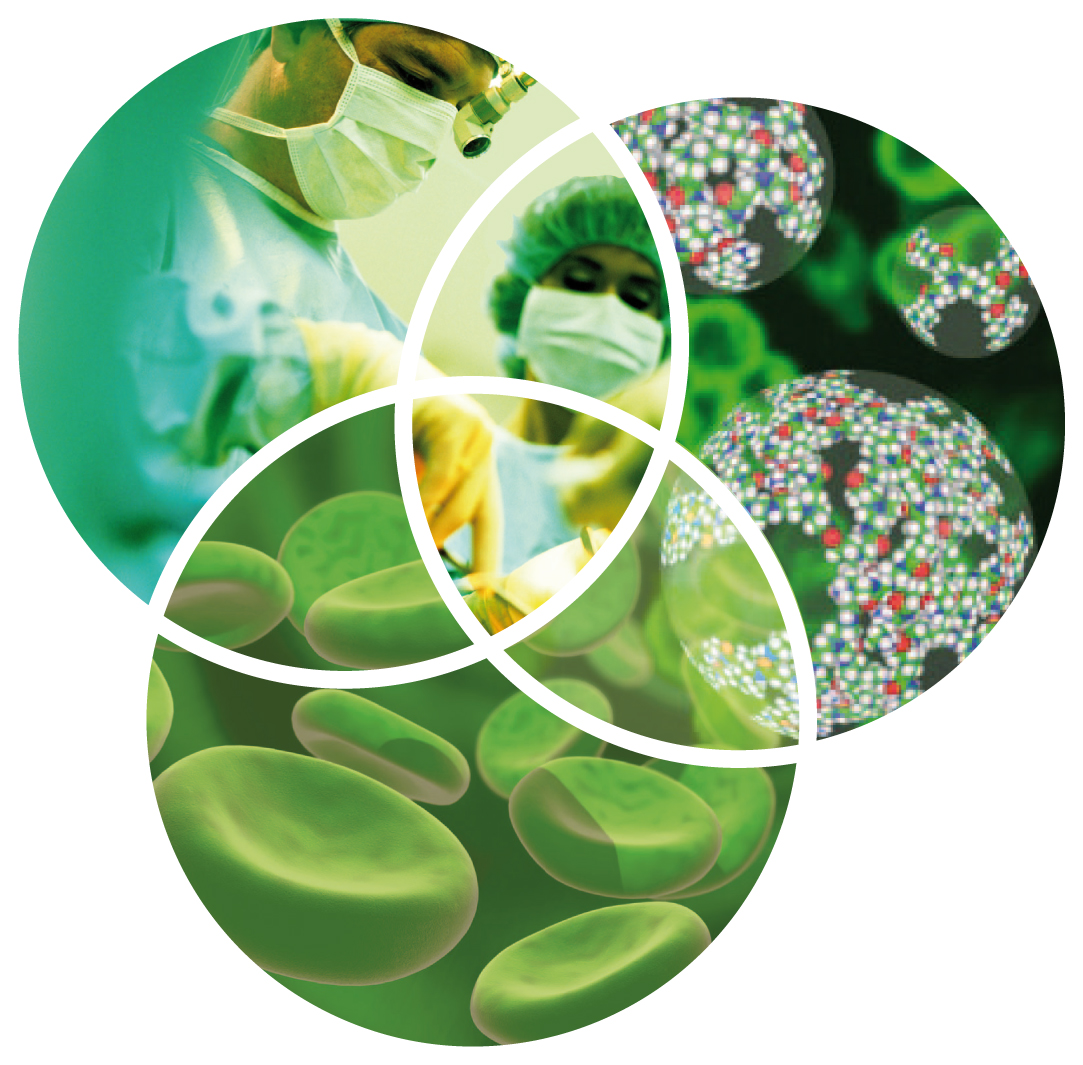 Nanomedicine is the medical application of nanotechnology

Nanomedicine research is receiving funding from the US National Institute of Health. In April 2006, the journal Nature Materials estimated that 130 nanotech-based drugs and delivery systems were being developed worldwide. Nanomedicine seeks to deliver a valuable set of research tools and clinically useful devices in the near future. The National Nanotechnology Initiative expects new commercial applications in the pharmaceutical industry that may include advanced drug delivery systems, new therapies, and in vivo imaging. Neuro-electronic interfaces and other nanoelectronics-based sensors are another active goal of research. Further down the line, the speculative field of molecular nanotechnology believes that cell repair machines could revolutionize medicine and the medical field.

Nanomedicine is a large industry, with nanomedicine sales reaching 6.8 billion dollars in 2004, and with over 200 companies and 38 products worldwide, a minimum of 3.8 billion dollars in nanotechnology R&D is being invested every year. Two forms of nanomedicine that have already been tested in mice and are awaiting human trials are using gold nanoshells to help diagnose and treat cancer, and using liposomes as vaccine adjuvants and as vehicles for drug transport.

Nanomedical approaches to drug delivery center on developing nanoscale particles or molecules to improve drug bioavailability. Drug delivery focuses on maximizing bioavailability both at specific places in the body and over a period of time. This can potentially be achieved by molecular targeting by nanoengineered devices. It is all about targeting the molecules and delivering drugs with cell precision. Using nanoparticle contrast agents, images such as ultrasound and MRI have a favorable distribution and improved contrast. 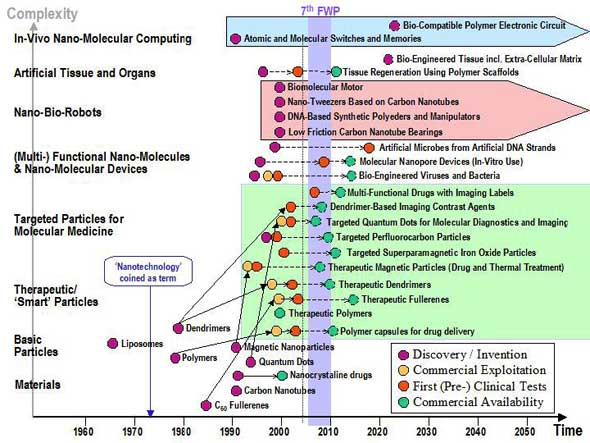 Drug delivery systems, lipid- or polymer-based nanoparticles, can be designed to improve the pharmacological and therapeutic properties of drugs. The strength of drug delivery systems is their ability to alter the pharmacokinetics and biodistribution of the drug. Nanoparticles have unusual properties that can be used to improve drug delivery. Where larger particles would have been cleared from the body, cells take up these nanoparticles because of their size. Complex drug delivery mechanisms are being developed, including the ability to get drugs through cell membranes and into cell cytoplasm.

Efficiency is important because many diseases depend upon processes within the cell and can only be impeded by drugs that make their way into the cell. Triggered response is one way for drug molecules to be used more efficiently. Drugs are placed in the body and only activate on encountering a particular signal. For example, a drug with poor solubility will be replaced by a drug delivery system where both hydrophilic and hydrophobic environments exist, improving the solubility. 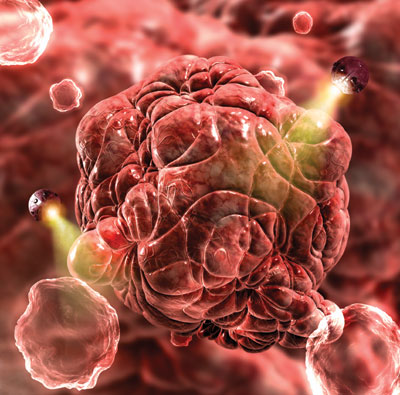 Nanotechnology could be used to fight pathogens

Also, a drug may cause tissue damage, but with drug delivery, regulated drug release can eliminate the problem. If a drug is cleared too quickly from the body, this could force a patient to use high doses, but with drug delivery systems clearance can be reduced by altering the pharmacokinetics of the drug. Poor biodistribution is a problem that can affect normal tissues through widespread distribution, but the particulates from drug delivery systems lower the volume of distribution and reduce the effect on non-target tissue.

The small size of nanoparticles endows them with properties that can be very useful in oncology, particularly in imaging. Quantum dots (nanoparticles with quantum confinement properties, such as size-tunable light emission), when used in conjunction with MRI (magnetic resonance imaging), can produce exceptional images of tumor sites. These nanoparticles are much brighter than organic dyes and only need one light source for excitation.

This means that the use of fluorescent quantum dots could produce a higher contrast image and at a lower cost than today’s organic dyes used as contrast media. Additionally, the small size of nanoparticles (10 to 100 nanometers), allows them to preferentially accumulate at tumor sites (because tumors lack an effective lymphatic drainage system). A very exciting research question is how to make these imaging nanoparticles do more things for cancer.

For instance, is it possible to manufacture multifunctional nanoparticles that would detect, image, and then proceed to treat a tumor? This question is under vigorous investigation; the answer to which could shape the future of cancer treatment. Kanzius RF therapy attaches microscopic nanoparticles to cancer cells and then “cooks” tumors inside the body with radio waves that heat only the nanoparticles and the adjacent (cancerous) cells.

Sensor test chips containing thousands of nanowires, able to detect proteins and other biomarkers left behind by cancer cells, could enable the detection and diagnosis of cancer in the early stages from a few drops of a patient’s blood. 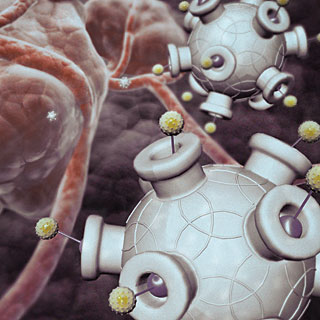 Nanomedicine - Revolutionizing the Fight against Cancer

The basic point to use drug delivery is based upon three facts:  a) efficient encapsulation of the drugs, b) successful delivery of said drugs to the targeted region of the body, and c) successful release of that drug there.

Researchers at Rice University under Prof. Jennifer West, have demonstrated the use of 120 nm diameter nanoshells coated with gold to kill cancer tumors in mice. The nanoshells can be targeted to bond to cancerous cells by conjugating antibodies or peptides to the nanoshell surface. By irradiating the area of the tumor with an infrared laser, which passes through flesh without heating it, the gold is heated sufficiently to cause death to the cancer cells.

Nanoparticles of cadmium selenide (quantum dots) glow when exposed to ultraviolet light. When injected, they seep into cancer tumors. The surgeon can see the glowing tumor, and use it as a guide for more accurate tumor removal. In photodynamic therapy, a particle is placed within the body and is illuminated with light from the outside. The light gets absorbed by the particle and if the particle is metal, energy from the light will heat the particle and surrounding tissue.

Light may also be used to produce high energy oxygen molecules which will chemically react with and destroy most organic molecules that are next to them (like tumors). It does not leave a “toxic trail” of reactive molecules throughout the body (chemotherapy) because it is directed where only the light is shined and the particles exist. Photodynamic therapy has potential for a noninvasive procedure for dealing with diseases, growth and tumors.

At Rice University, a flesh welder is used to fuse two pieces of chicken meat into a single piece. A greenish liquid containing gold-coated nanoshells is dribbled along the seam. The flesh welder could weld the artery perfectly. Tracking movement can help determine how well drugs are being distributed or how substances are metabolized. It is difficult to track a small group of cells throughout the body, so scientists used to dye the cells.

While different color dyes absorb different frequencies of light, there was a need for as many light sources as cells. The dots can be random in size, can be made of bio-inert material, and they demonstrate the nanoscale property that color is size-dependent. As a result, sizes are selected so that the frequency of light used to make a group of quantum dots fluoresce is an even multiple of the frequency required to make another group incandesce. Then both groups can be lit with a single light source.

It is greatly observed that nanoparticles are promising tools for the advancement of drug delivery, medical imaging, and as diagnostic sensors. However, the biodistribution of these nanoparticles is mostly unknown due to the difficulty in targeting specific organs in the body. Current research in the excretory systems of mice, however, shows the ability of gold composites to selectively target certain organs based on their size and charge.

These composites are encapsulated by a dendrimer and assigned a specific charge and size. Positively-charged gold nanoparticles were found to enter the kidneys while negatively-charged gold nanoparticles remained in the liver and spleen. Neuro-electronic interfacing is a visionary goal dealing with the construction of nanodevices that will permit computers to be joined and linked to the nervous system. This idea requires the building of a molecular structure that will permit control and detection of nerve impulses by an external computer. 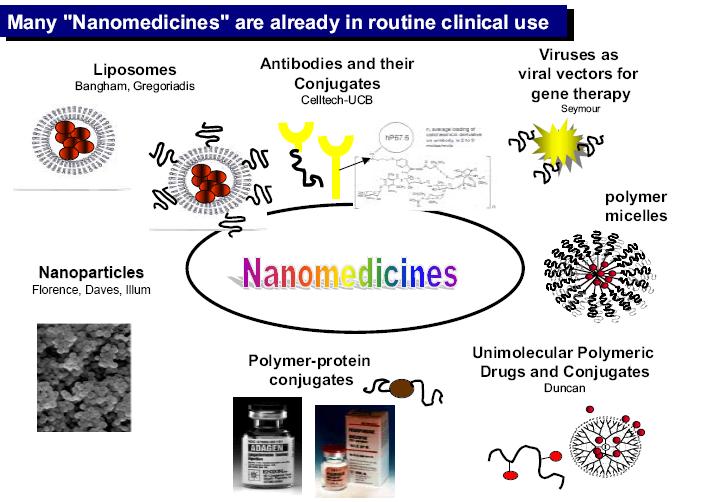 The computers will be able to interpret, register, and respond to signals the body gives off when it feels sensations. The demand for such structures is huge because many diseases involve the decay of the nervous system (ALS and multiple sclerosis). Also, many injuries and accidents may impair the nervous system resulting in dysfunctional systems and paraplegia.

If computers could control the nervous system through neuro-electronic interface, problems that impair the system could be controlled so that effects of diseases and injuries could be overcome. A refuelable strategy implies energy is refilled continuously or periodically with external sonic, chemical, tethered, magnetic, or electrical sources. A nonrefuelable strategy implies that all power is drawn from internal energy storage which would stop when all energy is drained.

Electric fields, electromagnetic pulses (EMP), and stray fields from other in vivo electrical devices can all cause interference. Finally, thick wires are also needed to conduct substantial power levels without overheating. The structures that will provide the interface must also be compatible with the body’s immune system so that they will remain unaffected in the body for a long time.

Nanomedicine would make use of these nanorobots (e.g., Computational Genes), introduced into the body, to repair or detect damages and infections. According to Robert Freitas of the Institute for Molecular Manufacturing, a typical blood borne medical nanorobot would be between 0.5-3 micrometres in size, because that is the maximum size possible due to capillary passage requirement. Carbon could be the primary element used to build these nanorobots due to the inherent strength and other characteristics of some forms of carbon (diamond/fullerene composites), and nanorobots would be fabricated in desktop nanofactories specialized for this purpose.

Nanodevices could be observed at work inside the body using MRI, especially if their components were manufactured using mostly 13C atoms rather than the natural 12C isotope of carbon, since 13C has a nonzero nuclear magnetic moment. Medical nanodevices would first be injected into a human body, and would then go to work in a specific organ or tissue mass. The doctor will monitor the progress, and make certain that the nanodevices have gotten to the correct target treatment region.

Using drugs and surgery, doctors can only encourage tissues to repair themselves. With molecular machines, there will be more direct repairs. Cell repair will utilize the same tasks that living systems already prove possible. Access to cells is possible because biologists can insert needles into cells without killing them. Thus, molecular machines are capable of entering the cell. Also, all specific biochemical interactions show that molecular systems can recognize other molecules by touch, build or rebuild every molecule in a cell, and can disassemble damaged molecules.

Finally, cells that replicate prove that molecular systems can assemble every system found in a cell. Therefore, since nature has demonstrated the basic operations needed to perform molecular-level cell repair, in the future, nanomachine based systems will be built that are able to enter cells, sense differences from healthy ones and make modifications to the structure.